For several weeks now we’ve been using Swashbuckle in our ASP.Net 5 Web API to assist document and even test our API endpoints. This is a brand new API, and we’ve been doing everything we can to follow best practices with regards to Web API’s. Our discussions and decisions regarding best practices are always focused upon the practices themselves, and not necessarily upon the technical implications of an outcome. Thanks to the superb extensibility of ASP.NET 5, this hasn’t been an issue. That is, until today, when we came across an issue that many others also seem to have had problems with.

The problem is pretty simple, and I don’t believe to be too uncommon. We have an API endpoint which returns a list of addresses based upon the postcode (or zipcode, if you’re so inclined).

NB: I googled for an example UK postcode; the above is apparently the postcode for Birmingham City Council.

Depending on the address service you’re using under the hood, this will result in several addresses (5 in my case).

I’m intentionally going to avoid the discussion of what is, or is not best practice at this stage, but suffice to say, we decided that it would be appropriate to be able to call our API with both postcode and a house name or number, with the intent of retrieving fewer, or preferably, a single result. I’m not sure how a postcode differs to zipcodes, but postcodes will often return several results, so a filtering mechanic seems quite reasonanble.

We could have gone about this in several ways, but the decision was to route the following request:

To implement this, our AddressController looks something like the following:

The keen-eyed among you will immediately spot the problem; we have two methods for the same Route.

There are actually two problems with the above controller methods. The first exception encountered was:

Multiple operations with path ‘addresses/{postcode}’ and method ‘GET’. Are you overloading action methods?”

This is an exception thrown by Swashbuckle, version 6.0.0-rc1-final at time of writing. It’s not immediately obvious, but all the ASP.Net 5 variants of Swashbuckle are not actually present in the main Swashbuckle GitHub Respository. Instead, you can find the code in the Ahoy Respository also owned by the Swashbuckle author, Richard Morris.

The specific line of code that throws the above exception can be found here. I managed to find mention of Conflict Resolution in the primary Swashbuckle Repository, but any code present in there had clearly not been ported to Ahoy yet.

I changed the linked lines of code to no longer throw an exception:

…and introduced some new functionality onto the SwaggerDocumentOptions class:

As you can see in the above snippet, I maintained the original behaviour of throwing a NotSupportedException when a conflict is detected, but provided the ability to extend the conflict resolution. I’m sure this could have been done in different ways, and I may well tidy it up later, but this certainly works.

To use the above changes, I modified my Startup class as follows:

The implementation of ApiDescriptionConflictResolver is as follows:

Let’s break down what’s happening here, as I imagine with some tweaks it could be very reusable.

ApiParameterDescription is a reference type, so no two parameters would actually be equal by default. To combat this we use a fairly simple IEqualityComparer to determine equality:

This class utilises both Jon Skeet’s Singleton Advice, and his implementation of property based hashcode comparisons, resulting in two different instances of ApiParameterDescription being determined as equal if the ModelMetadata, Name, Source, and Type are equal.

Ok, with all those pieces of the puzzle in place, navigating to the default swagger URI (~/swagger/ui) shows the API signature exactly as intended! 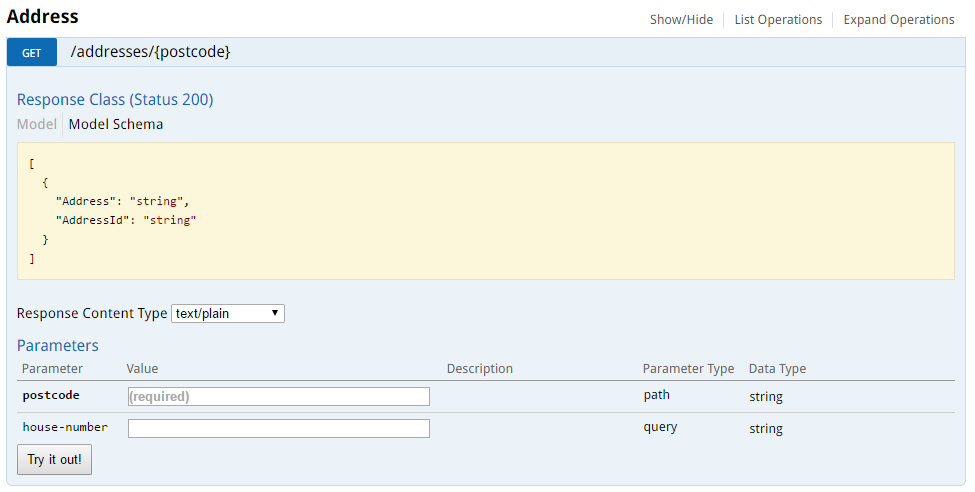 Note that only one method is shown, with the house-number correctly identified as being both a query parameter type, and as optional. Perfect! But the battle isn’t quite over…

NB: All of the above can be seen on this pull request. I hope to get it into a state that we can PR back to Swashbuckle (Ahoy).

Unfortunately, whilst we’ve cleared up the method ambiguity for the Swagger documentation, we’ve done nothing to the same effect for MVC. When I clicked Try it out! in the above screenshot, I received the following MVC exception:

So close, but so far. Fortunately, ASP.Net 5 is completely open source, so it didn’t take me long to track down the method that throws this exception.

However, not only is ASP.Net 5 open source, but it’s also incredibly extensible compared to it’s predecessors. We can see that line 72 calls the virtual SelectBestActions method to allow consumers to interfere with conflict resolution!

So, I inherited from the DefaultActionSelector and added an override for the method:

As you can see, the DefaultActionSelector requires several dependencies, but that’s no issue. By specifying the same dependencies on my own class, the new dependency injection framework manages that all for me.

By overriding the default implementation, it’s important to be aware that this class will get called for every request that makes it into the MVC pipeline, so it was equally important to short-circuit the execution as quickly as possible for the cases I don’t care about. The first two lines achieve that in a fairly simple way, immediately returning if there’s 1 or less actions (i.e. no conflict).

EDIT 2016-04-29: I later upgraded the above implementation as follows

The final piece of the puzzle is to make one more change to your Startup file:

This places our implementation of the IActionSelector into the list of services available to your application.

It is crucial that you add your service after calling services.AddMvc(). This is because, when multiple implementations of the same service are added to the service collection, the Microsoft DI Framework will always pick the last implementation added.

With all these little pieces in place, I ran swashbuckle again and hey, presto! We’re in business.